Referential vs. Expressive Language: Which Style is Your Toddler? – BabySparks

0
Your Child’s Feet: Unsung Heroes of Development!
26 July 2019
Social - Emotional
Referential vs. Expressive Language: Which Style is Your Toddler?
23 July, 2019 by BabySparks in Social - Emotional 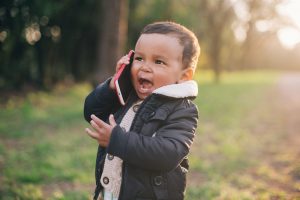 Like many areas of development, language tends to evolve in similar ways for most children. When they’re first learning words, though, there can be a divide: Some toddlers prefer a “referential” style of speaking, while others prefer an “expressive” style. While some little ones blend the two styles, most favor one or the other. Research shows that culture can play a role in toddler language style: Mothers in the U.S., for example, tend to label objects, which encourages a referential style. In Japan, mothers often speak more socially to their babies, which lends itself to an expressive style.

Neither style is better than the other, but the rate at which little ones add vocabulary may differ. We’ll talk more about that below, but first let’s explore what each style looks like.

Toddlers with a referential language style use vocabulary to refer to things. They label objects and people, and structure their speech with the goal of being understood. They tend to interact more with adults and less with peers. They use more single words, gradually building longer phrases and sentences from there. They may enjoy looking at books or pictures and labeling the objects and people they see.

For little ones with this style, helpful supportive strategies include building on what they say. For example, if your little one sees a cat and says, “Cat!” you can respond with something like: “Yes, it’s a cat! Me-ow! Look how fuzzy it is.”

Toddlers with an expressive language style basically just go for it, talking on and on, unconcerned about whether or not they can be understood. They interact with both adults and peers, often speaking in a way that is unintelligible. They use fewer nouns and more social and functional words, like “hi” or “mine”. Language is used mainly to express feelings and needs, and to socialize. Another tendency of expressive speech is to lump two words together into one (also known as “unanalyzed wholes”). For example, “allgone” or “stopit”. These toddlers learn language by gradually breaking longer phrases and sentences into single words.

Helpful supportive strategies for toddlers who prefer an expressive style include adjusting your own speech to emphasize certain words. For example, if a toddler says: “Iwannagosto,” you can say: “Oh, you want to go to the store.”

Are you interested in learning more about speech development? You may want to check out our articles on: