The Evolution of Babbling – BabySparks

0
Babble Back: How Meaningful Responses to Babbling Boost Language Skills
03 July 2017
Next

0
Encouraging Your Toddler’s Independence
24 July 2017
Speech
The Evolution of Babbling
3 July, 2017 by BabySparks in Speech 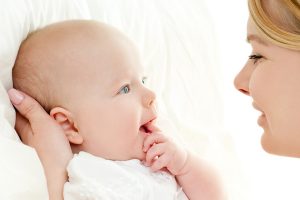 Long before your baby utters his first word, he will speak by babbling. These adorable, non-sensical sounds are actually his way of making sense of using his voice box, mouth and breath to form sounds. It’s practice for speech, which is a precise skill not only requiring hundreds of muscles to work together, but also the coordination of breathing, voice, articulation and resonance—all at lightning speed. Incredible!

The foundation for speech begins with crying and cooing, and moves through predictable stages of babbling.

The Stages of Babbling The evolution of babbling roughly follows the timeline below. The most important thing is that these stages occur in order. If your baby is lagging far behind, your pediatrician or a pediatric speech-language pathologist can offer guidance.

During this stage, your baby communicates that he’s hungry or uncomfortable through crying. He coos and sighs, and begins to make sounds that require his voice box to vibrate, like gurgles.

As he begins learning to coordinate his lips and tongue, your baby makes simple speech sounds (goo) and directs them at you or objects. Engaging him by babbling or talking back encourages eye contact and simple imitation of sounds.

Simple babbling begins with single-syllable speech sounds, like ba, da and ma. Your baby experiments with volume, tone, pitch and intensity. Life gets noisy as he squeals, yells, growls, and blows raspberries.

True babbling begins with reduplicated babbling. This will sound like ba-ba or na-na. Your heart may explode when he says ma-ma, but actually understanding what he’s saying comes later. Towards the end of this stage, increased coordination and control of his mouth and voice box opens the door to clear sounds and more defined articulation and resonance. He says the same syllable over and over (ba ba ba ba), and mimics turn-taking as if he’s having a conversation.

Your baby begins variegated babbling, or mixing different sounds (ba de da). He also attempts to imitate noises produced by objects. If you build him a block tower and knock it down, he may say boom! He may also shake his head and say no.

Starting around now and continuing for several months, real words gradually take over. At this stage he has about 3 words that he uses correctly, although his receptive language (what he understands) is much further along. How to Encourage Babbling Introduce different types of solid foods at the right times. Your baby uses the same oral muscles to speak as he does to eat. Each time he graduates to a new category of solid foods, he uses his oral muscles in stronger, more coordinated ways. This, in turn, helps him make more complicated speech sounds. Shelf the pacifier when your baby is awake, alert and fed. Pacifier-free time will allow for plenty of babble practice. Babble back! Aside from building important pathways in your baby’s brain, a recent study found that responding to your baby’s babbles in a meaningful way can have profound positive effects on his language development. Key takeaways from the study were to make eye contact, respond enthusiastically, and label and elaborate on what your baby is babbling about. If he babbles at a car, say: “Yes, that’s a car! It goes vroom vroom.” For more about the benefits of engaging in conversation with your baby, long before his first word, see our article Babble Back: How Meaningful Responses to Babbling Boost Language Skills.