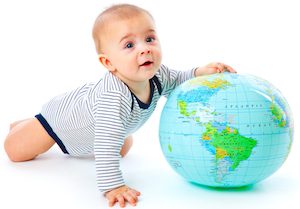 Hola. Bonjour. Ni hao. Hello. How many of these greetings do you recognize? Do you speak more than one language in your home? Does your child? Increasingly, the answer to that last question is ‘yes’. Dual language learning is on the rise in much of the world, and that’s a great thing. Research has demonstrated conclusively that learning two or more languages concurrently has multiple benefits.

Traditionally, people have studied a second language because of cultural, socio-economic and career competitiveness benefits. There are even studies that quantify the increased income potential for those who master a second language. But the positives of bilingualism go much further:

When should I start?

A child’s ability to become fluent in a language is at its highest when she is exposed to it from the beginning, starting in the first few months of life. In fact, according to Patricia Kuhl, babies at 7 months of age have a remarkable ability to differentiate sounds from any global language. By 12 months their ability to understand their own language has improved, but their ability to identify unique sounds in other languages has decreased significantly. 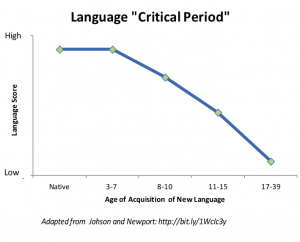 language? Absolutely not. But it does mean the earlier you consistently expose your child to a second language, the better. It’s never too late, of course, though the learning curve does get much steeper after age 7.

Not only is timing important, but the quality of the interactions matters. A baby’s ability to learn a second language decreases significantly if the exposure is via a screen (e.g., television or computer) vs. an in-person interaction. Above all, value in-person conversations where your baby can watch your mouth, your tongue, your face while you (or others) communicate. This will help them pick up cues faster.

How can I help my child become bilingual?

If the child is growing up in a home in which at least one of the parents are bilingual there two major lines of thinking:

If the child is growing up in a home where neither parent is bilingual (yet the parents want their child to achieve full fluency of a second language), parents need to find a way to reinforce the non-native language on a daily basis (or as frequently as possible). The most obvious solution is to enroll their children in an immersion program at school or other rigorous school-based language program. For babies and toddlers, parents that are minimally familiar with another language can also:

Regardless of how you introduce another language, know this: Your child’s first language learning will not be harmed. In contrast to the ‘old school’ thinking that learning two languages might somehow delay the progress of a child’s first language learning, we now know that children’s brains are far more capable about balancing both than we used to give them credit for. Sure, there may be an occasional instance when your child has to pause and think about which word she needs, but at the end of the day, her second language learning will be a huge advantage in today’s global world.

Maureen O’Brien, PhD is a developmental psychologist, parenting coach and author of ‘Watch Me Grow: I’m One-Two-Three’, available at http://amzn.to/1QtvyFl. More parenting tips and resources can be found on www.destinationparenting.com.