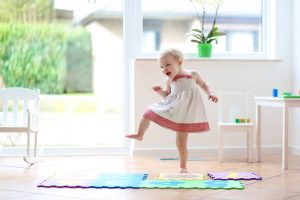 Ah, milestones. They’re a source of both excitement and anxiety. Watching your little one take her first steps is thrilling, but if she’s a late walker you may worry about her development.

Indeed, lagging behind on milestones has long helped identify developmental delays, but what does reaching milestones early say about a child’s future? If your little one starts walking and talking long before her same-age peers, does that mean she’s destined for Harvard?

Research hasn’t given us a clear answer.

When it comes to a possible link between early milestones and superior intelligence, studies are mixed.

What the Research Says

Where early talking is concerned, it may be linked to giftedness. The Davidson Institute cites a study showing that among 241 “profoundly gifted” children, 91 percent started taking early. On average, they said their first words at age 9 months.

This study looked at whether early motor skills are associated with better cognitive abilities later on. It tracked 599 children and found that those who stood without assistance early scored higher on cognitive tests at age 4. In addition, the early standers were also better at mastering other tasks, like self-feeding, by age 4.

This study, however, looked at the age of first steps and found that “children who start walking early turn out later to be neither more intelligent nor more well-coordinated.”

So what are you to make of all this?

Child development experts acknowledge that research in this area is compelling. They stress, though, that studies are still exploratory and do not draw firm conclusions.

Experts also stress that parents and caregivers should not try to rush children through milestones, as long as they’re reaching them within normal range. Each milestone prepares the child for the next one.

Rather than looking ahead to what’s next, support your child’s current phase so she can reap its full benefits. If she’s crawling, for example, play games with her that encourage it. If you try to get her to walk before she’s ready, she may miss out on the rich developmental perks of traveling on her hands and knees.

What about toys and videos designed to teach your baby to talk, read, or do other advanced things? There is no scientific evidence that these will make your baby smarter. In fact, they may backfire because they interfere with a primary building block of development: Thoughtful back-and-forth interactions with parents and caregivers. You can find science-backed ways to optimize your baby’s smarts here.

The optimal way to set your child up for her best future is to help her have a rich and meaningful developmental experience. If you’re using BabySparks, you’re already doing it!