0
Babble Back: How Meaningful Responses to Babbling Boost Language Skills
03 July 2017
Cognitive
Giving Your Baby A Smart Start
26 June, 2017 by BabySparks in Cognitive 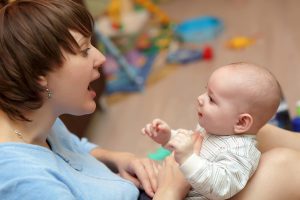 With toys named after famous geniuses, baby-friendly smartphone games, and baby classes galore, raising a smart baby may seem like a sophisticated and expensive task.

The truth is, science does not support claims that certain toys, electronic activities, and classes boost intelligence (IQ). What science does support is the idea that intelligence depends on a mix of genetic and environmental factors, and moving the needle may be simpler and less expensive than you think.

How You Can Give Your Baby a Smart Start

Secure attachment is linked to higher IQ (as well as many other benefits) and is characterized by a reliable, responsive, and warm relationship between a baby and her primary caregiver(s).

As part of healthy attachment, responding to your baby’s cues to interact can boost her intelligence. Engage consistently in meaningful back-and-forth with her through facial expressions, gestures, sounds, words, actions, and play.

Interestingly, research has shown that in families with more than one child, the oldest tends to have a higher IQ. Researchers think this may be because parents often spend more time interacting with their first babies before siblings divide their time.

Language skills are correlated with IQ, so talk and read to your baby as often as you can right from the start. A large part of language is receptive language, or what we understand, and this develops sooner than expressive language, which includes words. From the beginning, your baby is listening to you and acquiring receptive language. Those early monologues are valuable for your little audience of one!

Research shows that thoughtfully responding to your baby’s babbles and first words can boost her language skills as well. For example, if you’re driving and she says, “Cah!” You can respond by saying, “Yes, that’s a black car! It’s going fast. Vroom, vroom.”

A nutrient-dense diet in early life has been linked with higher intelligence. For premature babies at risk of lower IQ, a diet containing zinc, iron, folate, iodine, B12, and protein has shown to reduce those effects. There was even a study showing that 3 year-olds who ate a significant amount of processed food had lower IQs at age 8 than their same-age peers who ate diets rich in fruits, vegetables, and fish.

Introducing music to your baby has many benefits, including supporting IQ-related brain functions. Listen to music with your baby, sing and dance with her, and include a set of toy instruments in her playthings.

We may never know whether nature or nurture carries more weight in determining intelligence, but all of these suggestions may play a role in enhancing it. What’s more, each of them can positively affect other areas of your baby’s development as well.