Toddler Tantrums: When and Why Do They Happen? – BabySparks

0
Picky Eating or Sensory Issue? How to Tell the Difference
24 October 2019
Next 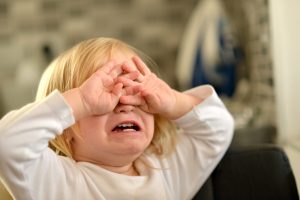 When your sometimes-fussy-but-mostly-calm baby turns into a screaming, crying, angry toddler, your world can quickly turn upside-down. Fortunately, there’s at least somewhat of a silver lining: The tantrum-throwing phase is normal, and it won’t last forever.

When Do Tantrums Start?

Tantrums usually hit their peak around the 18-month mark, but they can start as early as 12 months. Before that, your baby’s fussiness is mostly an attempt to let you know she needs something. Tantrums are much more pronounced, usually escalating to screaming, throwing toys, or even hitting or biting.

It’s common for tantrums to be their worst until about 24 months, then gradually taper off through age three. By the time your toddler turns four, she’ll probably have enough language skills to tell you what she needs instead of acting out.

Why Do Toddlers Have Tantrums?

There are a lot of reasons your toddler might throw a tantrum, but they usually stem from her needing something from you. Some of the more common tantrum triggers include:

Not being able to communicate needs.

Young toddlers, especially, will throw a tantrum to let you know they need something simply because they don’t have the language skills to tell you. Your toddler could be hungry, tired, feeling sick, or she may even just need some cuddles, but it all plays out the same way as a tantrum.

Engaging in a power struggle.

As your little one grows and develops her own way of thinking, she’s going to want a little more control over her experiences. That’s why you may see your toddler throw a tantrum after telling her, “No.” As frustrating as it can be for you, this is a reasonable way for toddlers to test their limits, figure out their interests, and learn healthy assertiveness.

Even adults can be stuck in their ways and become anxious when their usual routine gets interrupted. It makes sense, then, for toddlers to feel the same. The smallest changes in routine, like visiting the bank before going straight to daycare in the morning, can cause a lot of big emotions for your toddler. Disrupting eating and sleeping routines can also trigger tantrums, simply because being hungry and/or tired can make all of us feel extra emotional.

Although all tantrums seem to be major problems for both you and your toddler when they’re happening, it’s important to remember that most tantrums are completely normal. They’re often just another way of saying, “I need something!”

However, tantrums can become a serious problem when there are underlying causes for them. Frequent and intense outbursts from an inconsolable toddler can signal another issue, like sensory processing difficulties, autism, anxiety, or a social-emotional delay. If you think your toddler’s tantrums aren’t typical, you should bring up your concerns with her pediatrician as soon as possible.

Working on emotional intelligence and self-regulation skills with your toddler can give her the tools she needs to work through her emotions more calmly as she gets older. Also, be sure to head over to our tips for preventing toddler tantrums.