0
Telegraphic Speech: What It Is and How It Develops
02 October 2019
Next

0
Theory of Mind: The Foundation of Relating to Others
08 October 2019
Social - Emotional
Transitional Objects: How Your Child’s Favorite Stuffed Animal Promotes Social Emotional Development
8 October, 2019 by BabySparks in Social - Emotional 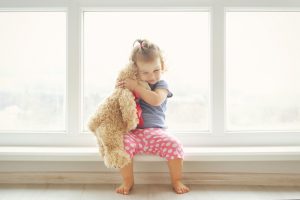 What is a Transitional Object?

Transitional objects are chosen possessions that offer security and comfort to a child. They’re often soft and huggable items, such as teddy bears and blankets, that are used to soothe during a transitional phase. Fundamentally, these objects are an emotional support system that can offer a lot of reassurance to a child facing separation anxiety or an uncertain circumstance. Going to daycare or preschool for the first time, sleeping in a new bed, or meeting a new nanny are all common scenarios that might call for this transitional object to be close by.

Parents and caregivers commonly share a lot of questions when it comes to transitional objects. Why did my child choose this object? Is his attachment to this object healthy? What if he can’t bring it with him somewhere? And of course, is it okay to wash it? Besides the occasional nibbling on a dirty blanket, transitional objects are actually quite healthy! Let’s take a look at their role in early child development.

A Brief History of Transitional Objects

There are plenty of pop culture references to transitional objects belonging to different characters throughout history. But none are quite as popular as Linus and his blanket from Charles Shulz’s Peanuts cartoon. This image helped spark the conversation around the phenomenon of transitional objects back in the 1950s. Pediatrician and psychoanalyst, Dr. Donald Woods Winnicott, coined the term “transitional object” in 1953.  He wanted parents and caregivers to understand how truly meaningful these objects were to a child. He stressed the importance of an infant or toddler choosing his or her own transitional object, and explained that it represents a connection between the mother or primary caregiver and the external world. The use of a transitional object may seem to be an ordinary form of child’s play, but it really is a big developmental step!

Making the Most of Transitional Objects

You might notice the use of a transitional object appearing as early as 4-6 months or as late as 24-36 months. Child psychologists explain that you can help encourage a healthy relationship with your child’s chosen transitional object by placing it next to him when he seems anxious. Remember that when he starts to turn to this object for security and comfort, it’s a move towards independence. He knows that he can feel safe in the world even though a caregiver or parent isn’t around. Some worry that a child clinging to a transitional object may be a sign of weakness or insecurity, but that’s a misunderstanding stemming from culture rather than scientific evidence. So when your neighbor asks, “Is it okay that he’s so attached to that stuffed animal?”, you can say “Yep! It’s actually a healthy sign of independence.” Fun facts for the whole neighborhood!

Here are some other points to help you foster the use of transitional objects:

Remember that a transitional object will invite a child to express themselves, connect, and emotionally flourish.