Infant Reflux – All About GER and GERD – BabySparks 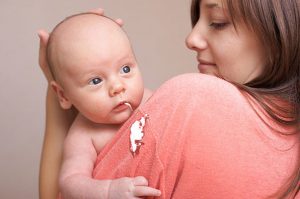 Have you ever wondered why so many babies spit up after feedings, sending their parents scrambling for burp cloths? It turns out this painless spitting up is a common type of reflux known as gastroesophageal reflux (GER), occurring in up to 65% of babies.

GER occurs when a baby’s lower esophageal sphincter (LES) is weak. The LES is designed to let food pass from the esophagus into the stomach and keep it there. In babies with reflux, food splashes back into the esophagus after being swallowed. “GER does not harm an otherwise healthy baby,” says pediatrician Dr. Jaime Edelstein, MD of Gables Pediatrics. “It is a natural process of maturation.”

GER is exacerbated because babies are lying down a lot of the time, have a liquid diet, and have tiny tummies. As they get older, their LES develops, they sit up more, and they start to eat thicker food. All of this helps resolve GER, and most cases disappear between 6-12 months of age.

A smaller number of babies (about 1 in 300) have a more serious form of reflux, known as gastroesophageal reflux disease (GERD). GERD can lead to problems like stomach acid irritating the esophagus, so it’s important to talk to your pediatrician if your baby has any symptoms of GERD:

Edelstein generally recommends the following interventions for reflux that is troublesome or severe. Ask your pediatrician if they might be beneficial for your baby.

Rule out a cow’s milk allergy. Symptoms of a cow’s milk allergy can mimic GERD symptoms. If you breastfeed, your pediatrician may recommend cutting cow’s milk from your diet and waiting 1-2 weeks to see if the symptoms go away. If your baby drinks formula with cow’s milk in it, you may be advised to switch to another type.

Elevate one end of your baby’s crib so that he sleeps at an angle. Because lying flat tends to aggravate reflux, raising your baby’s head may help.

Try thickening breastmilk or formula with infant cereal (1 teaspoon of cereal per ounce breastmilk/formula). Simply making his liquid diet heavier may reduce the severity of his reflux.

Try medications such as ranitidine (Zantac) or lansoprazole (Prevacid). For babies, these require a prescription. They are designed to reduce acid in the stomach and should only be used under your doctor’s supervision if your baby’s reflux is severe.

For some babies with GERD, symptoms persist into childhood and even adulthood. Most babies who receive treatment, however, grow out of the condition without persistent negative effects.

Please remember that this article is meant to provide information and is not a substitute for diagnosis and treatment by a medical professional.