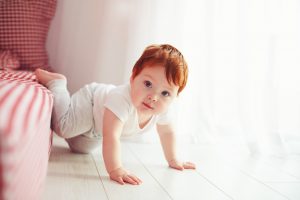 If your experienced crawler made her way to the edge of a tall bed, would she fall off? What if your brand-new walker toddled to the top of a climbing wall at a playground? Would she look over the edge and freeze?

Do babies and toddlers instinctively know that heights are dangerous?

Luckily you don’t have to try these experiments yourself, because researchers have spent endless hours doing it for you! The first study to explore this was the classic “Visual Cliff” experiment. In 1960, researchers Eleanor Gibson and Richard Walk placed crawling 6-14 month-olds (as well as baby animals) on a plexiglass surface, half of which was over a large drop-off, to see what they would do when they encountered the edge of the “cliff.” Nearly all of them peered over the edge and refused to cross over.

But current researcher Karen Adolphdisagrees. For over 20 years she has replicated the visual cliff experiment countless times. In her research, though, she uses actual drop-offs and other height obstacles (with a researcher hovering to catch little ones before they fall).

What Adolph has found is that new crawlers head straight for, and over, the cliff. It doesn’t take them long, though, to begin carefully experimenting with different ways to get down. Then, as soon as those crawlers start walking, they go straight for the cliff again – only to be caught by a researcher as they toddle off the edge! But just as they did as crawlers, the new walkers start deliberately and figuring out through trial and error how to get down without hurting themselves. And throughout all of this, there wasn’t a trace of fear on their faces.

Adolph’s work suggests that if depth perception/fear of heights alone kept little ones from crawling off the edge, it would apply to every stage of motor development. What she found instead is that with each new motor skill (sitting, crawling, cruising, and walking), babies and toddlers need to recalibrate their movements to a new way of seeing and being in the world – a process that teaches them to gauge what they can, or can’t do safely.

What can we learn from this?

What can parents and caregivers learn from this? Perhaps that we need to keep little ones safe, but we also need to let them take appropriate, supported physical risks. We can’t assume that fear would prevent our new walker from walking off the edge of the climbing wall at the playground structure, but we also can’t prevent her from learning (with support) how to get down safely. Little ones need a chance to learn how to use their bodies in new situations, and practice mastering those skills.

In other words, it’s important to recognize the windows in which little ones don’t understand the limits of their abilities, and need us to hover. But it’s equally important to slowly take small steps away as we allow them to take small steps forward, both teaching and trusting them to find their footing.