0
Pragmatic Language – How Your Child Learns to Relate to Others
21 August 2017
Gross Motor
Cruising: Preparing Baby for First Independent Steps
10 August, 2017 by BabySparks in Gross Motor 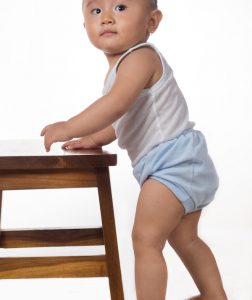 Pulling up to stand was exciting for your little one. Suddenly he could see his surroundings like never before. To explore in this new, upright position, he starts shuffling his feet side-to-side while holding on to furniture or other large, fixed “support” objects. This is cruising, and it prepares him to move in an upright position for the rest of his life.

When Do Babies Cruise?

Babies generally start cruising within weeks of learning to pull to stand, usually between 10-12 months.

How Does Cruising Evolve?

Cruising starts with tentative side-to-side steps. As your baby gets used to bearing weight on his feet, he will gradually rely less and less on his hands for support. Eventually he’ll cruise with confidence, taking wider steps and using his hands only to steady himself. When he’s comfortable, he’ll experiment with holding on with one hand, switching to the other hand, rotating his trunk to turn and look around, and even letting go for a split second to cruise from one support object to another.

Cruising is prime time for your baby’s hips. The act of stepping side-to-side develops his hip abductors—the muscles on the outside of the hips that allow one leg to remain stable while the other swings through space. Strong hip abductors are crucial for walking, so cruising is an important prerequisite.

Cruising also strengthens his leg muscles and core, which gives him the power and postural stability required to move while holding himself upright.

Pediatric Physical Therapist Dr. Andrea Hayward, PT, DPT explains that just as crawling helps develop the hands for hand-related fine motor skills, cruising does the same for the feet. As your baby cruises he shifts his weight from one part of his foot to another, shaping and preparing his feet for the fine-motor movements involved in future milestones like walking, running, jumping, and climbing.

Cruising promotes motor planning, which allows us to safely and efficiently navigate our environment. Being able to do things like turn corners while walking through a building, swerve while driving to avoid a pothole, or maneuver a cart through a crowded supermarket are a result of motor planning. Hayward explains that cruising supports this because your baby must figure out how to turn the corner when he reaches the edge of the coffee table, for example, or get around a toy on the floor.

How to Encourage Cruising

Above all, set your baby free to cruise as much as possible! As with every stage of his development, cruising is a difficult new skill that takes a lot of practice to master. The better he masters cruising, the more prepared he’ll be for the next stage: Walking!