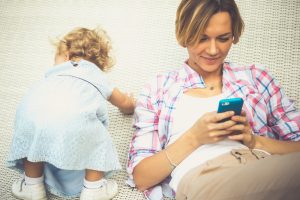 A recent study published in the Child Development Journal has found that extensive smartphone use by parents may potentially interfere with toddler development. Before we summarize these findings, we want to remind parents and caregivers that we’re not here to shame you – we get that smartphones are a part of life!

However, when new data emerges, we want parents and caregivers to have all of the information they need to make decisions that best support their children’s development. With that being said, let’s take a look at this fascinating study led by Dr. Katy Borodkin at the Sackler Faculty of Medicine of Tel Aviv University.

Summary of the Study on Parent Smartphone Use

The goal of this study was to simulate real-life scenarios that so many parents and caregivers experience daily: dividing attention between a toddler and a smartphone. The mothers invited to participate in this experiment were not aware of the purpose of the study. They were told that the researchers were exploring the link between the mother’s and child’s interests.

The mothers were asked to perform three tasks while their toddlers were present:

As they carried out each task, the researchers examined three critical components of the interaction. First, they noted maternal linguistic input, which is the content the mother conveys to the child. Next, they measured the interactiveness of each conversation. For instance, how many interactions took place within the discourse. Lastly, they looked at maternal responsiveness, which includes things like the immediacy and quality of the response. The researchers explain that the three components (maternal linguistic input, interactiveness, and responsiveness) directly contribute to key areas of child development, including language, social, emotional, and cognitive skills.

“We found that the three components of mother-child interaction were reduced by a factor of two to four relative to uninterrupted free play, both when the mother was reading printed magazines and browsing on her smartphone,” states Dr. Katy Borodkin. “In other words, the mothers talked up to four times less with their children while they were on their smartphone.” Borodkin’s team concluded that the mothers exchanged fewer conversational turns, provided less immediate responses, and more often ignored their child’s cues when they were distracted by their phones.

It’s probably not completely surprising to hear that dividing time between a smartphone and a toddler can be problematic; if you’ve read our article about joint attention, you already know how important it is to share meaningful interactions with your little one. However, it can be startling to learn how drastically smartphone use can interfere with those interactions.

While the study concludes that both smartphones and magazines eroded the communication between mothers and toddlers, the researchers note that since we use smartphones more than any other form of media, they pose a more significant threat. In addition, even though the study only involved mothers, Dr. Borodkin concluded that the findings characterize smartphone usage patterns similar to fathers, leading to a high probability that the results are applicable to both parents.

So what does this mean for you? Setting mindful boundaries around your smartphone use is a smart thing to do when it comes to your child’s development. And remember – a little bit of distraction-free, quality time goes a long way. Try setting aside even a brief period of uninterrupted play with your child each day. Play, read, talk… and of course, our BabySparks activities are a great way to build in focused time with your little one. After watching the activity video tutorial, you can put your phone away, and play!