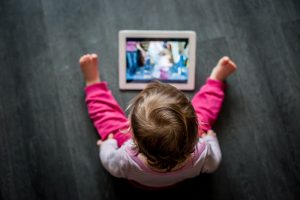 Type “educational baby videos” into a search bar and you’ll see about 200 million results. Despite experts warning against screen time in babyhood, developers of these videos claim they’ll give even young infants a cognitive boost. But research tells us that not only do babies (and toddlers) not learn anything from videos, videos may actually interfere with learning.

What does the research on baby and toddler videos say?

This University of Virginia (UVA) study set out to see if videos designed to teach 12-18 month-olds new words were effective. Researchers split children and their parents into three groups: In one, children watched videos alone. In another, they watched videos with a parent. In the last group, the children didn’t watch videos at all; the parents were instructed to try to teach them new words in everyday interactions.

The researchers found that children who watched videos for a month (whether alone or with a parent) didn’t know any more of the words than the children who had never seen the videos. The children in the parent-teaching group, on the other hand, learned substantially more words than those in either video group.

This study, although small, looked into whether children ages 6-24 months who watched YouTube videos reaped any educational benefit from them. The researchers found that the children were certainly entertained but, alas, they did not learn anything from the videos.

Results from a University of Washington study went beyond the conclusion that baby videos are not educational, showing that they can actually hinder learning. The researchers found that for every hour per day spent watching videos, babies understood an average of six to eight fewer words than babies who didn’t watch them.

If baby and toddler videos aren’t actually educational, why do so many parents think they are?

The UVA study suggests that the popularity of videos for little ones might have to do with how appealing the videos themselves are to parents. Parents who enjoyed the videos were more likely to report that they were beneficial to their child, while parents who did not enjoy the videos said they weren’t.

The study’s author also highlighted that children are watching these videos during a time of rapid development, and parents may be attributing new skills to the videos rather than natural development.

Lastly, children often go through a period (or periods) when their vocabulary grows quickly in a short amount of time. Parents may mistakenly think the videos were responsible, when it was actually a natural “word spurt.”

Why don’t babies and toddlers learn from videos?

Thanks to mounting research into development, we know that interacting with parents and caregivers is the number-one driver of learning in the early years. In fact, these interactions literally shape children’s brains in a way that affects them for the rest of their lives. This study, in particular, shows how cognitive and language development thrive on feedback to babbling and other infant sounds. The author highlights that babies learn to babble from hearing people around them talk, and the more people around them respond to their babbling, the better their cognitive and language development will be.

Another well-known study, which examines the “30-Million Word Gap,” found that hearing more words as a baby during verbal interactions with parents was linked to extraordinary benefits years later, including a bigger vocabulary and better academic outcomes.

If we look at baby and toddler videos in this light, we can see that rather than teaching a little one new words and concepts, they’re taking away from the optimal set-up for learning: Parent-child interaction. Research has confirmed this, too. A University of Massachusetts study showed that conditions involving baby or toddler videos decreased parent-child interactions overall. There is one catch: Children can benefit from “co-viewing” videos with a parent or caregiver (this is when a parent or caregiver views high-quality videos with their child and then carries the subject matter into their interactions afterwards).

The takeaway? There’s no evidence to date that baby or toddler videos have any educational value, and parent or caregiver interaction is the gold standard when it comes to teaching little ones new skills!