Infant-Parent Attachment: The Four Types & Why They Matter – BabySparks 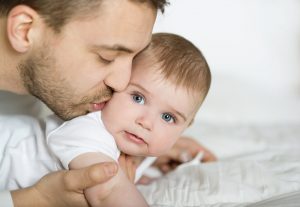 A baby is upset and letting the world know through a bout of crying. Wow, a completely rare occurrence, right? What the baby’s caregiver does next is key to how she will relate to the world as she grows.

We’ve entered the realm of infant-parent attachment theory, which looks at whether a child feels safe, secure, and protected with a parent or caregiver. Some form of attachment will happen with a caregiver—it’s just a matter of quality. Attachment theory has established four types of attachment: secure, avoidant, ambivalent, and disorganized.

Studies have shown that how a child first attaches to her caregivers has a lasting impact on how she relates to other people as she gets older.

To illustrate the four types of attachment—and their consequences—let’s take a look at the different reactions a child can have as determined in research performed by Mary Ainsworth. Ainsworth’s experiments involved leaving a child alone as well as with a stranger and having an observer write down the child’s reactions.

Sam has been fine with a stranger in the room until his mother leaves, because he is able to look back at her to make sure it’s safe to explore. Now that his mother has left the room, he is agitated and staying away from the stranger. When his mother comes back, he is delighted. This is because when he has shown uncertainty and concern in the past, his mother has responded comfortingly and consistently.

Anne is upset upon seeing the stranger in the room and avoids interactions with her. But when her father leaves for a bit and then comes back again, Anne avoids him as well and fails to cling to him when he picks Anne up.  This is because when she has shown uncertainty and concern, her father has ignored or been annoyed by the behavior, making Anne less likely to bother to seek comfort from him.

When Allen sees the stranger, he clings to his mother and then pushes her away. He shows a similar back-and-forth pattern when his mother comes back to the room after leaving for a bit. This is because when he has shown uncertainty or concern, his mother has been inconsistent—sometimes caring, sometimes annoyed. Thus, his reactions to her are equally inconsistent.

Debby avoids interacting with others and becomes extremely fearful at times, which doesn’t change whether her father is in the room with her or not. This is because when she has shown uncertainty or concern, her father has neglected her, so she has come to the conclusion that she can’t depend on anyone.

When is Attachment Established?

The phases of attachment are:

Preattachment—from birth to about 6 weeks of age: An infant’s attachment to a caregiver is just beginning, so they are okay being left with strangers.

Attachment in the making—from 6 weeks to 6-8 months of age:  An infant will react differently to a caregiver than to strangers but is still normally okay being left with strangers.

Clear-cut attachment—from 6-8 months of age to 18 months of age: When separated from a caregiver, an infant will start fussing. Attachment is in place!

Formation of reciprocal relationship—from 18 months to 2 years: An infant is starting to grasp the concept of a caregiver’s coming and going, so let the negotiations begin —“Just one more story?”

The Consequences of Secure versus Insecure Attachment

The many benefits of secure attachment are integral to a healthy life. They include, among others:

• More successful interaction with their peers

• Less conflict with their parents

And they end up being more responsive parents themselves. Secure attachment is a gift to future generations!

As for those infants who form insecure attachments, low self-esteem is common, and they are more likely to exhibit anxiety, depression, and withdrawal. In interactions with others, they may be more aggressive.

Of course steps can be taken in the future to help Anne, Allen, and Debby find the ability to form trusting and secure relationships, but it can be a difficult path. So if you want to help your child form a secure attachment like Sam did, here’s help to set her on the road toward a healthy relationship with you and others.