Cognitive
What are a Baby’s Primitive Reflexes? And why should I care?
10 May, 2016 by BabySparks in Cognitive 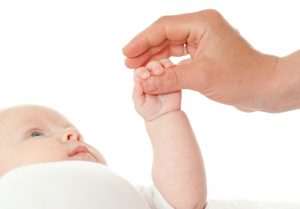 As you play and interact with your baby during his first months of life, you may notice that he already has a wide range of movements from the first days. Things like sucking on a finger that touches his lips or turning his head toward the direction of a touch on the cheek. Those may seem like planned actions, but they are automatic responses called primitive reflexes.

The more that infants interact with their environment and participate in daily activities, the more likely that those reflexes will be incorporated or integrated into their basic repertoire of movements. The good news is that the vast majority of babies will have no issues incorporating these movements – and parents can help them by engaging in focused play.These reflexes are present in utero and at birth and they can be triggered by changes in the baby’s environment or body. Primitive reflexes exist to help a newborn move, develop, and survive, but they should integrate or disappear within the first year of life. In most cases this happens, but when they don’t, they may have negative implications in areas as broad as physical coordination, bedwetting, muscle tone and learning abilities.

Babies have 70 known primitive reflexes present in utero and at birth, but we are going to concentrate on five that are among the ones with the biggest impact on early development: The Moro Reflex, Tonic Labyrinthine Reflex, Galant Spinal Reflex, Asymmetrical Tonic Neck Reflex, and Symmetric Tonic Neck Reflex.

It is important that reflexes disappear or integrate within the first year of life so that more controlled and refined movements can develop. Tummy time (while your baby is awake) and frequent interaction in a multitude of positions are essential in promoting development, strengthening muscles, increasing coordination and integrating reflexes. Babies learn through play and experiencing the world around them, so time spent in a supported seat, car seat, or bouncer should be limited.