How Babies Learn While They Sleep – BabySparks 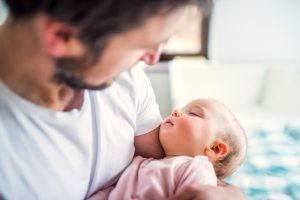 We know that naps are a must for babies and toddlers. Without regular naps, little ones are more prone to irritability, feeding problems, and poor nighttime sleep. In addition, new research shows that naps aren’t only crucial to development —they actually help babies learn!

The Role of Sleep in Learning

Newborns learn a lot in the first few months of life. Their brains are rapidly growing, and they’re constantly absorbing stimuli from their environment, yet they spend 70% of their time asleep. While thousands of studies have been done on the role of sleep in adults, little research has been done on how sleep impacts a child’s ability to learn. But recently, the scientific community has discovered some significant findings on the unique role of napping in the cognitive development of young children.

For example, one study conducted at the Humboldt University of Berlin shows that naps are critical for first-word learning. Of course, since infants can’t speak, scientists used an electroencephalogram (EEG) to detect brain responses in the babies participating in the study. Babies between ages 9-16 months saw pictures of unknown objects and heard a fictitious name with the image (for instance, a tinkertoy along with the word “bofel”). Then, half of the babies would take a nap, while the other half would remain awake. About two hours later, the EEG recordings showed that the babies who had taken a nap remembered the word-object pairs, while the non-nappers had not.

In another study focusing on preschoolers, researchers at the University of Massachusetts Amherst looked at memory recall after storytime. Researchers read the preschoolers (ranging between ages 3-6) a short story, then half of the children napped for about 2 hours, while the others stayed awake doing other activities. They found that the kids who napped recalled the order of events in the story more accurately than those who didn’t. The nappers also scored better on a second memory test the following day.

What This Means for Parents

Learning about sleep science can help parents and caregivers facilitate better routines for little ones and make naps a priority. Without a consistent nap schedule, children may be missing out on significant cognitive developmental benefits. The researchers conducting these experiments also believe that these findings can help promote naps for young children in school or daycare programs.

Rebecca Spencer, the cognitive neuroscientist who conducted the study at the University of Massachusetts Amherst, discovered that nap time has steadily decreased in preschools over the last 10-15 years. In some classrooms, children have a choice between taking a nap or going to another activity, like swim lessons or gymnastics. Spencer wants parents to be more aware of the impacts of napping. “If somebody is making a policy decision, or you’re letting parents choose between the nap classroom and the non-nap classroom, I think it should be an informed choice.”

Lastly, it’s important to remember that kids’ nap schedules vary worldwide. Some children still take regular naps at age 6, while others stop napping by age 2. Kids will begin walking and talking at different stages, and the same rule applies to sleep. If your toddler is functioning perfectly well with only one nap in the afternoon, it doesn’t necessarily mean that you have to force your kiddo to catch some zzz’s mid-morning. The point is to be more aware of the role of naps and recognize when a lack of sleep may be impacting their memory or learning.